The sequence editor is an easy to use tool for automating FarmBot operations. However, advanced users who are familiar with computer programming concepts may opt for a more advanced interface. For these users, we provide several methods to insert Lua code fragments directly into sequences:

Using a Lua command is the most straightforward and universal way to use Lua in your sequences. With the Lua command, you can execute up to 3000 characters worth of code - enough to operate FarmBot’s motors, sensors, peripherals, and camera, and even use 3rd party APIs.

The Assertion command also allows for long-form Lua code execution as well as the ability to execute a subsequence or abort execution depending on the return. (Learn more). 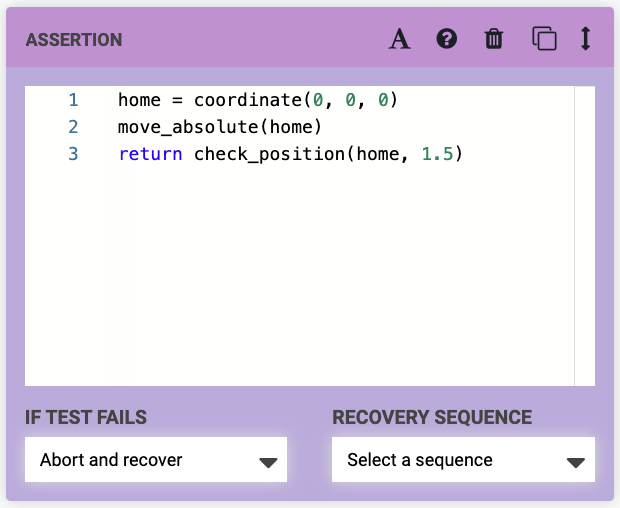 You can also execute Lua by using the formula option in a Move command’s OVERRIDE or X, Y, Z input fields. This option is generally best for short-form code that only deals with positioning.

A Note About Long-Running Lua Scripts

If you have a long-running Lua script that appears to slow down over time, or you find that FarmBot OS runs out of memory while a script runs, this most likely means that you need to run the garbage collector.

End users can trigger a garbage collector sweep by running collectgarbage(). Most users do not need to do this, and this advice only applies to long-running and memory-intensive Lua scripts.